Teleprompter and Its Uses

Blog Teleprompter and Its Uses

Teleprompter and Its Uses 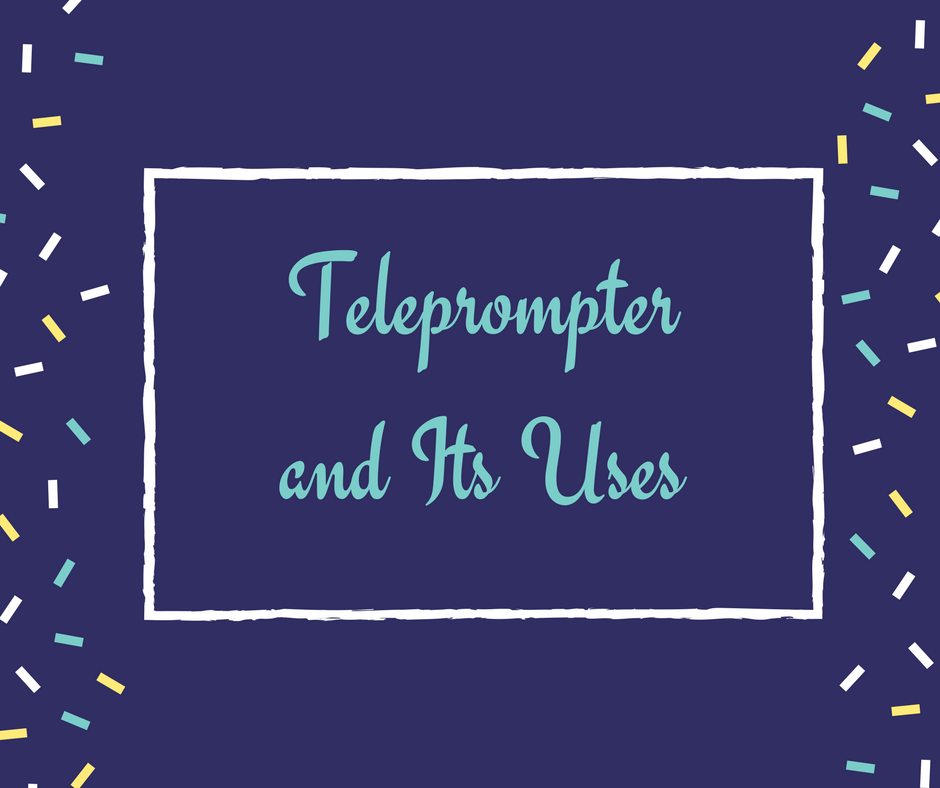 In any kind of business of today, technology plays a very big role. Since the beginning of time, man has scratched his head and worked hard to invent tools and complete tasks quicker and in an easier way. It is true that man makes machines to make themselves even more efficient, but these machines are very efficient themselves as well. When it comes to communication with the masses, you cannot underestimate the significance of tech. After all, it is because of the gadgets like microphones, computers, speakers, televisions, etc., that we can communicate with people on a larger scale.

You must be thinking, why is this guy suddenly blabbering about machines and their importance, aren’t you? Well, that is because there is one machine that plays a very important role in tv shows, conferences, news channels, speeches, and businesses on the whole, yet we don’t know its name. That machine is known as a teleprompter and in this blog, I will be telling you all about what it is and what are its uses.

What is a Teleprompter?

It is no secret that the key to achieving success in any kind of business is being a great communicator. Every business company as well as the mass audience value those individuals who have a great prowess over their ability to communicate properly. Any person who aces a public speaking is highly valued in a business because they are skilled in communicating with people and keeping them engaged with what he or she has to say. The teleprompter is one such piece of technology that has proven to be a great aid for the delivery of a presentation or a speech.

Talking about it’s history, the idea of a teleprompter was brought forth by Fred Barton Jr. in the 1950s, which later helped in the formation of TelePrompTer Corporation, which has the credit to have built the very first teleprompters. The very first teleprompter was nothing ecstatic, it was just a scroll of paper with a printed script on it, which was then run over a mechanical device, which would be operated by a technician who would stay hidden. Soon after realizing the potential benefits of this, the automated version of the teleprompter was introduced, which would stay mounted on a television camera.

Even though a lot of bells and whistled have been added to the initial teleprompter to help it get to where it is today, the initial mechanism of it has not changed at all, since the time they were first invented. The basic principle is that the visual text is displayed on a monitor that stays mounted under a piece of reflective glass, also called a beamspitter. This glass is transparent on one side, that allows the camera to shoot straight through the back of the glass, or to not be visible to the audience, and reflective on the other side, so that the narrator can see the reflection of the visual script.

Types of Teleprompters and Their Uses

The traditional use of teleprompters has been of two kinds – one, by television presenters who would want to be able to look directly towards the camera while reading the visual scripts, and two, by presidents, public speakers, and politicians, who want to maintain a direct eye contact with the public as they speak. In today’s day and age, the use of teleprompters has widened into several branches, including video bloggers, scripted video production, PowerPoint presentations, and singers performing on stage.

The presidential teleprompter is quite similar to the camera mounted teleprompter in the way it operates. The only exception is that the mirrored glass is kept mounted at the end of a thin pole, and not on a camera. However, similar to the on-camera models, the narrator is easily able to stare directly at the audience via the glass, as if it was non-existent. This is absolutely great for any kind of a live event.

3) The floor or stand teleprompter: –

This is a type of teleprompter that you can place at any angle on the floor, mount on a stand, or hand from rigging points in the back of the room where you’re recording. Pretty convenient, right? When using these teleprompters by themselves, floor mounted teleprompters can be just as good for use as the presidential teleprompters. But, this can cause the narrator to look downwards more or make them appear as if they’re only conversing with the first two rows in the audience. And that’s not good.

In addition to the physical teleprompter itself, there are various other components that are also important while using the teleprompters. Those are the software as well as the remote control. Both the presidential a camera mounted teleprompter needs photos to be reflected off the piece of glass, which then requires the original visual text to be reversed.

Published Date: 2018-04-07 | Tags: camera, corporate film makers, Teleprompter and Its Uses, video production services in mumbai, What is a Teleprompter